Home / Blog / What is control cable? 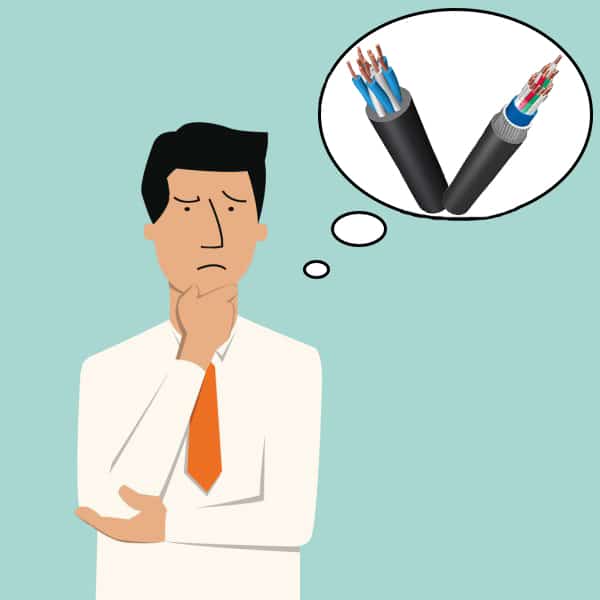 What is control cable?

SEND AN INQUIRY FOR CALCULATION

The control cable is an electric multicore cable, the main task of which is not to power the units, but to transmit reliable data on the location, structure and mode of operation of the technical equipment (i.e. to control its operation). The peculiarity of the control cables is that they ensure the real connection of electrical distribution devices to electrical units and fixed-type hardware complexes.

Comparing the communication and control wires, it is the latter that are resistant to current load. They are used at those facilities where it is necessary to connect devices with a rated alternating voltage of up to 660 V. In addition, one cannot do without such a cable in conditions of constant voltage up to 1000 V. The efficiency of using this subspecies of wiring products is achieved at a temperature indicator: -50 … + 50 degrees. Moreover, the laying of control cables is possible not only inside the structure, but also outside. They can be mounted in tunnels (on one condition – the product should not be subject to stretching and twisting). Joint laying of power and control cables is possible. But the condition must be met: the minimum gap between the cables is at least 0.25 m.

The scope of use of control cables KVVG: security points, secondary change circuits, automation, connection of individual sections of circuits, to control all kinds of industrial and household electronic devices, devices and telecommunication systems, control, security and data transmission, to measure or regulate technological processes. In addition to automation and control of production processes, such a cable is used in railway transport, in the food industry and construction, as well as in various types of electrical networks. It can be found on assembly and production lines, conveyors, computerized machine tools, stationary installations and as a connecting cable between fixed and mobile equipment. These products differ from switching wires in that they can withstand an electric current, and from power ones in that they are not intended for high current loads and have a larger number of cores (4-61), but a smaller section of each of them.
Certain types are used depending on the operating conditions and tasks:

Shielded – used in places with possible distortion of signals from external electromagnetic interference.
Armored – most often they are laid in the ground, since they have a protective shell that prevents mechanical damage.
With non-combustible insulation – used in fire hazardous facilities, the properties of the insulation allow them to resist the spread of combustion.
Low-smoke insulation – used in public places, since they do not emit a large amount of gas and smoke during a fire, which are dangerous to human health and life.

According to the rules, cables are allowed to be laid in tunnels, channels in industrial and residential buildings. To do this, it is necessary to comply with the requirement – the cable should not be stretched. If a slight tensile force is assumed, then steel strips treated with an anti-corrosion agent are pulled along the cable.
It is allowed to lay the control cable together with the power cable if they belong to the same device. In this case, the cables should not be close to each other, but be at a distance of at least 25 cm. This distance must be observed along the entire length of the cable.
When choosing a certain brand of cable, it is necessary to take into account the conditions of its operation. Also, we must not forget about the quality of manufacture; cables should be purchased only from trusted manufacturers. With the right choice, the control cables function properly and for a long time.

To buy a control cable, let’s understand the varieties:

Control cable KVVG is designed specifically for use in particularly difficult conditions (98% humidity). The main limitation during installation is the mechanical effect on the product.
Control cable KVVGng – LS is a subspecies of the KVVG model, the main advantage of which is fire safety.
KVVGEng-LS cable is shielded. Installed inside structures and in tunnels.
KVBbShv cable is a screened control cable for installation in fire hazardous areas, subways, outdoors, in the ground.

Control cables are marked with numbers and letters. Marking is necessary in order to obtain information about the parameters of a particular cable.

Basic labeling rules:
The letter “K” means it is a control cable.
Next comes the letter that determines the material for making the dielectric of the sheath of the veins. Usually the material is PVC plastic (letter “B”).
The subsequent letter defines the insulation material of the entire cable, that is, its sheath.
Further in the marking, the letter indicates the presence or absence of auxiliary protection. The letter “G” – means “naked”, “B” – the presence of “armor”.
Additional marking symbols can be “NG” – non-flammable, able to resist the spread of combustion, “LS” – reduced smoke generation, “E” – information that the cable is equipped with a metal shield. Other alphabetic marking symbols are also allowed.
The digital part of the marking includes numbers, the first of which indicates the number of cores, the 2nd – the cross-section of the core.

What is the control cable made of? The structure may include:

The main element of the cable is conductive cores, which are made of copper. The conductive core is most often made in the form of a single wire, or formed by a large number of thin wires to create flexible properties for the entire cable. Single conductors are used for cables connected for stationary devices, where bending, twisting and dynamic loads of the cable are not expected.

For mobile, mobile electrical installations, conductive conductors are made flexible, in the form of twisted wires. The cores, made of several copper wires, are tin-plated or used uncoated. Equipment of high voltage substations over 220 kilovolts may only be connected with copper cables and conductors. Aluminum does not provide sufficient cable reliability for high voltage equipment, and is prohibited from use.

The cross-sectional area of ​​copper conductors has its own standards and is in the range of 0.75-10 mm2. Thinner cores are used in low-power telecontrol, communication and other circuits that do not generate increased signal power. For precision measurement systems that have a high sensitivity to voltage drop, large cross-sectional conductor diameters are used.

The conductors are necessarily covered with insulation that does not allow current leaks and short circuits. The dielectric layer must have sufficient dielectric strength, preventing its breakdown at high operating voltage, and depends on the cross-section of the core. The thicker the core, the larger the insulation layer. The insulated conductors are bundled together and twisted with a certain number of turns to allow slight bending of the cable.

Do you want to know more, keep abreast of all events, know about new products in the range of MPKA cable products, and receive information about the uniqueness and features of a particular cable product?

Be sure to subscribe to our pages on the social network: